She won't listen, she is going to kill our child, and there isn't anything I can do about it........

While ministering at the EPOC abortuary  yesterday, I noticed a young man approaching me after I had asked him if he would come and speak with me. 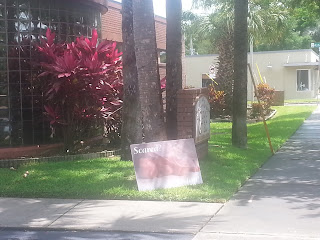 As he got closer, I could see the turmoil he was in and the tears in his eyes.

I asked him if his girl was inside the abortion center, to which he said yes, with his head to the ground.

I asked him if this was his baby and again, struggling, he said yes.

This is when he began to tell me that he has and had been trying hard to talk her out of killing their baby.  He said that he told her that he would be there for the baby, for her, and do whatever it took; but she wouldn't listen, and now she was waiting for the abortionist to show up.

I told him, "you must not give up, you must go back in and try again."  He agreed, went back in, but within ten minutes he was out, and walked directly back to me.

"She won't budge, she won't come out, she's bent on killing our child, there is nothing I can do!"

I asked if he knew God, if he ever went to church when he was younger, and right away, he told me he grew up in church, and knew full well what God felt about this, and he was sick to be there.  He told me that he could feel the evil in that place.

I told him that if after trying hard to save his baby, and her refusing, that if she wouldn't change her mind, he should leave, and the bloodshed would not be on his hands.  I also told him that today could be the day that he could totally surrender his life to Christ, even in the midst of what was happening.

With tears in his eyes and acknowledging and agreeing with what I said he walked to his car.

Shortly after that, I noticed another young man pacing back and forth with his head down.  I called to him and asked if he would come and speak with me, and to my surprise, he began to walk toward me and as he got closer, I could see the same turmoil as the other young man as well as tears in his eyes.

I asked him, "What's going on?  Do you have a girl inside waiting for an abortion?  Is this your baby?"

I asked him if he knew God and right away he said "Yes, I grew up in the pentecostal church, I know better."

I then said to him, "Then you know what God says about shedding innocent blood, and that HIS word says, Thou shalt not kill."

"Yes, I know, this is killing me, but she just won't listen to me.  I've asked her not to do this, I want this baby."

I told him, "You must try again, please go back in and get her out."  I gave him information, and he agreed to go back in and try to plead with her to not go through with killing their child.

Again, as with the other young man, he was inside for about ten minutes, came out and walked toward me with his head down.....I knew what this meant without him having to tell me.

"She won't listen, she is going to kill our child, and there isn't anything I can do about it."

I told him, that we could pray, which we did, and I also told him the same thing I told the other young man, that if she refused and continued on with her plan of killing their child, that he should leave to avoid bloodshed on his hands, and also that this could be the day that he truly surrendered his life completely to Christ, even in the midst of all of this death.

With tears in his eyes, he thanked me and headed for his car.

Unbelievably, a short time later, Miss Pat whom I was ministering with was talking with another young man, who, with tears in his eyes, was telling her that he had tried everything to stop his girl from having an abortion, but she wouldn't listen, and she was sitting inside this building of death.

I gave him one of our brochures with all of the help available and told him to try again, to which he agreed as the other two young men did.

He went inside and came out a short while later, but, telling us she would not change her mind!  We could see the turmoil in this young man, he was truly torn apart and did not know what to do.

Suddenly his abortion bound girl came out and I talked with her a bit, but she wouldn't budge and was determined to follow through with her plans of paying someone to stop the beating heart of their child.
She went back inside and this young man stayed with us for the next hour.  We prayed with him, talked with him, but most of all really shared the true gospel of Christ with him, and just as with the other two men, I told him the same thing....."even in the midst of this horrible situation, and this death, this can be the day that you truly surrender your whole life to Jesus Christ.  This young man broke down before us confessing that he had grown up in the church as the other young men and had strayed away, and knew he had to make changes and surrender his whole being to Christ.

This is when he told me he wanted to go back inside one more time and try to convince the mother of his child slated to die to not go through with the killing, and to speak with someone working in that place of death and let them know how he felt as a man.

We prayed for him as he went inside, hoping for a miracle, that this young lady would change her mind, but this did not happen....she stayed inside, bent on killing their baby.

But he did speak with someone in management and had them explain to him exactly what was going to happen to his baby, they even told him the baby would feel pain.  He then leaned against the counter and looked at her in his eyes and said, "How can you sleep at night?"

He came back out to us, trembling and very broken, we prayed again, and I shared with him the same I shared with the others, that if his girl wouldn't change her mind, he must leave to avoid the bloodshed on his hands.

As I drove home, my heart ached for what we had experienced at that place of death yesterday.  It's not often that we see men in turmoil over their babies being killed.  Normally, the men are just about dragging the women inside and can't wait for the abortion to be over.  But, this morning, there were three broken men, all had strayed from God, and all pleading and begging with the mothers of their children to let their babies live, to not kill them.  Unless there was an intervention, these three men are now the father's of a dead child.

The reality, unfortunately in our land right now is the fact that unborn human beings are the property of the mother, and NO human being should ever be the property of another.  Women absolutely decide who lives and who dies in this nation....this should never be, and must be changed.

I can only pray that this holocaust will end in our land, and that personhood would be restored for the most vulnerable, small and weak in our land.  God have mercy...... RISE UP OH YE MEN OF GOD!

Posted by His servant for life at 5:50 AM