While ministering at the awhc abortuary a couple days after the horrific and tragic shooting at the Parkland High School in south Florida, my eyes were drawn to the security guard at this killing center. 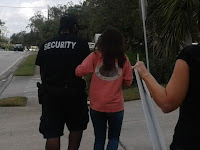 Taking his job seriously, he makes sure to greet every car that pulls into the parking lot, speaking kindly to the abortion bound women and those accompanying them; walking them to the door, with his arm around each woman....assuring them that everything will be alright!

When the parking lot fills up, he sends them over to the neighborhood across the street, and has them park over there.

He will then sometimes walk across the street so he can walk the women over, or meet them at the corner, put his arm around them, escorting them toward the building, so as to protect them from us! 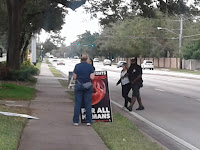 Yes, he is very serious about his job, while he proudly displays his gun in his holster for all to see!

Which then made me think of the students at the Parkland High School, who had NO guard watching out over them; they in essence were sitting ducks, while the shooter had free access to this school, while NO ONE greeted, questioned or stopped him...no one I.D. him.

And he was even a security threat!  But no guard was there to stop him, NOTHING, NOBODY!

Which brought me back to the abortion mill I was ministering at, and the thought came to my mind....

How have we come to a place in our nation that we place the right of women to kill their own babies, over the protection of our young people going to school?

Since the shooting, the most ardent advocates of abortion have been spouting off things such as "we must stop the slaughter of our babies", while they are the ones who will defend the right of women to have their babies arms, legs and heads ripped off!  The sheer hypocrisy is sickening!

Instead of guards defending the right of women to hire someone to kill their babies, guards need to be at our schools watching over students, making sure crazed killers aren't allowed access, instead of free reign!
Posted by His servant for life at 4:30 PM No comments: