I'm a Christian, But In This Case, It's the Right Thing To Do!

"Sir, please get your woman out, be a rescuer today, save your little baby boy or girl!  Your baby is a precious gift from God!"

"There is free help available, please go back inside and be the man that God has called you to be, a protector of women and children!"

These were some of the many offers of help and pleas to rescue the innocent child of an abortion bound father who had come with his girlfriend to the Planned Parenthood abortuary the same day as our last Jesus Loves the Little Children Day.

"Whatever we can do to help, let us help you,"  were the words of one of the fathers who had brought his family out to stand for life and to be a voice for the voiceless.

"You don't understand our situation, there is no way we can afford this baby, this is what we have to do....we don't want to do it, but we have to!"  These were some of the words that came from the father of the baby scheduled to die, among so many other reasons to have his child killed.

"Sir, would you say that you are a Christian, do you believe in Jesus?" Questioned one of the sidewalk counselors.

With shock, many of us responded telling him, no, God would never want one of His precious babies killed, you must rescue this baby!  Go back in now and get your girl out!

Sandra, one of the sidewalk counselors than shared how her family had been in extremely similar circumstances, but how they had chosen to trust God completely.  She shared with passion, that yes, there were trials, but God always has and had provided, and if he would completely put his trust in Christ, that HE would provide, that you just have to trust and put your faith  in HIM and not the circumstances.

Well, the father did go back inside, but he didn't come out, not until the end when we were all leaving, he came out of the abortuary door with his girlfriend, who was crying.

Shortly after they drove off, Sandra, the counselor who had encouraged the father to put his whole trust in God remembered that the father had given the name of the church the couple attended, so she called their pastor.

Amazingly when the pastor answered the phone to speak with her, he actually had the name and phone number of the aborting mom in his hand!!!!!  And when he heard where she and her boyfriend had been he was filled with sorrow, and said that he would try to meet with them immediately!  He was very thankful Sandra had called him!

We all again began to pray that God would use this pastor to save this baby, and continued praying throughout the afternoon!

The next morning, thank the Lord there was a text on the ministry phone from the couple telling us that they had the lamanaria removed last night!  Oh the thankfulness and joy that came upon all of us...thanksgiving unto the Lord God Almighty!

Thankfully, we had given the father one of our brochures the day prior at Planned Parenthood, and showed him our phone number.....thank the Lord he kept that brochure and we were able to find out that they had removed the lamanaria!

I immediately returned the text, and we made arrangements to meet for lunch that day, which we did, a few hours later.

As Sandra and I sat with this couple, they explained that shortly after they had left Planned Parenthood, they received a phone call from their pastor, who wanted to meet with them immediately, which they agreed to have the pastor and his wife come to their house early that evening.

Through their meeting that evening, God used this pastor and his wife to rescue this precious baby, and not only that, to encourage them to do the right thing and get married, letting them know they would help them through this time!

After the pastor and his wife left, the couple went to the emergency room and had the lamanaria removed, and the baby was fine, the heart was beating strong, and things looked good!

They told us, that they repented of the very thought of killing their child, and there was much weeping from this mommy!

We asked her how far along she is, and ashamedly she said, 5 months, "I can't believe I was going to do this to my baby!"

We spent a couple hours with this couple, and then they left for a follow up appointment to see how she and the baby were doing.

Frantically a few hours later, this mommy, who just the day before was planning to have her child killed, was crying telling us that her cervix had dilated and her muscous plug was coming out, and had fear that she was going to lose the baby!

We told her that we would call one of the doctors in our area that helps, and would see if we could get an appointment for her, which, as soon as we contacted this incredible doctor he said that he could see her the following day!

We began a prayer chain, and prayers began to sore to the Lord God Almighty, pleading with HIM to close this cervix and to keep this baby safe!

Well, praise be to God when the mommy went to see the doctor the next day, miraculously the cervix 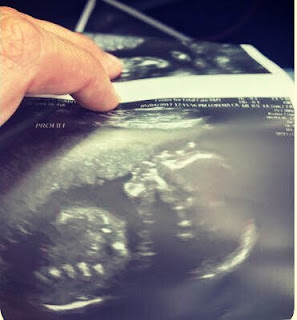 had scabbed over and sealed....the baby was safe and snug in her womb!  Hallejuah to the King of Kings!

We are in awe of what God has done, and this is such an example of the body of Christ working together for the sake of a babe.....all working for the life of an innocent child, and being the hands and feet of Jesus!

God truly did a miracle, and HE gets all the glory, honor and praise!  To HIM be the Glory!

Now, we plan to attend their wedding, and continue to walk through this season with them....please remember to pray for them, and their precious child!

Posted by His servant for life at 3:47 PM